A Viking Funeral in New Jersey? 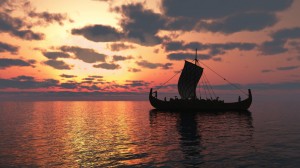 Many people don’t dream of their “perfect funeral”, in fact many people avoid thinking about this all together. But one man knew exactly what he wanted out of his funeral and thanks to the US Coast Guard, he had the ultimate farewell.

According to USA Today, Andrew Haines a WWII veteran had been planning his funeral for over 10 years. He wanted to go out in a way that would honor his heritage, he wanted to have a traditional Norse style send off. What exactly does that entail? A lot of planning.

The Norse (or Vikings) built special funeral ships that they would place their dead in. After loading up the ships with burial gifts, they would then ignite the ship on fire as it drifted off to sea. While this was common back in Norse times, today lighting a ship on fire as it drifted in the sea required special permission from the US Coast Guard. “Burial at sea is not that uncommon,” Boatswain’s Mate 1st Class Christopher Fonseca, Atlantic City’s operations officer, told Navy Times. “We probably do about seven a year just at Atlantic City.” but as this burial was a little more elaborate, the Coast Guard approved the Norse style burial and oversaw that everything went smoothly.

The family was escorted out to sea in a motor boat about 3 miles off the coast of Atlantic City. They then placed the cremated ashes of Andrew Haines in the miniature Norse boat that was t was a perfect replica, 53 inches long built to scale by Andrews son Andy, lit the wood shavings and gently let the sea take Mr. Haines away. The boat burned for about 20 minutes as the family said some final parting words and nautical themed poems were read.

So how much did this cost? Well, besides the material and time invested making the Funeral Boat, Mr. Haynes burial at sea was free. Burials at sea are free for any United States Military Veteran.

We love this story because Andrew Haines was able to have the goodbye he deserved. How important it is for us to plan ahead to ensure we can have the Burial that we want. Not only for us, but for our families we leave behind. To have the closure of the perfect send off can make all the difference in the world. RIP Mr. Haines, and thank you for your service.